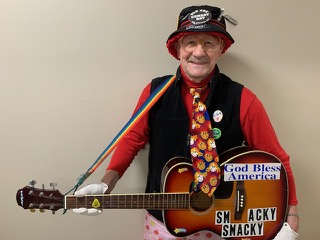 Do you know why cows moo? Their horns don’t work.

If that line brought a smile to your face, then you know what it’s like to be around Mt. Washington resident Rick Busby, 82. For more than 50 years, Rick—or, Mr. Smacky, as he is known—has been bringing humor and hope to hundreds of lives, including children, veterans and older adults.

Rick is himself a Navy veteran who entered the service at age 17 and served from 1955 to 1963. He was stationed on the USS Porterfield Destroyer and although he was in charge of firing the ship’s big guns (he was a pointer on a 5-inch mount), many of his comrades came to know him as the ship’s barber who brought a touch of humor into otherwise harrowing circumstances.

“If morale was low, I would start cracking jokes,” Rick recalls. “A shipmate would sit in my barber’s chair and ask what’s new, and I’d say, well, New York, New Hampshire, New Jersey. I was funny and didn’t know it. I was just wanting to make people laugh. It helped all of us get through the war, including me.”

Why did the turkey cross the street? It was the
chicken’s day off.

Rick wasn’t always clowning around in his younger years though. “I had difficulty learning in grade school so I got picked on a lot,” he shares. “It hurt a little bit and it made me angry. Even when I went through boot camp, I got teased a lot. So I learned to fight back. I got into boxing and even had a couple of matches while in the Navy. And when people would say things to me, I’d have a comeback.”

After serving our country, Rick went on to work as a crane operator for Lockhart Iron and Steel in McKees Rocks, a job that he jokingly says “had its ups and downs.” He also worked as a stock boy at the flagship Kaufmann’s Department Store downtown. On his days off, he’d go to the Carrick community swimming pool and do silly dives. He attracted attention and his clown career slowly grew by word of mouth.

Santa won’t have all of his reindeer this year. Comet went down the drain. Now he has a replacement: Ajax.

Over the years, Rick has entertained at countless parties. In the 1980s, he expanded his repertoire to include being the Easter Bunny at Parkway Center Mall in Greentree, and Santa Claus in parades and other events. He’s made media appearances on a number of radio and television shows over the years, and has won a handful of awards: the Keystone Clownitarian Award in 1985 by the Keystone Clowns; the Mid-Atlantic Clowns Chaplin of the Year award in 1986 and 1987; special honors by Caring and Sharing, Inc. in 1988 for accompanying hospitalized veterans on boat outings; and for 30 years of “unselfish and caring service to hospitalized veterans” presented by the officers and members of VFW District 29 in Brentwood.

His real reward, Rick says, is knowing he’s made people laugh. He has a special place in his heart for military veterans, so he’s spent a lot of time visiting them at the VA hospitals in Oakland and Aspenwall. In the 1970s, the US Navy made Rick an honorary Navy recruiter at the Whitehall recruiting office. To this day, he encourages everyone to wear red on Fridays in honor of our soldiers. “I love America. The only day I don’t clown around is on Memorial Day. When someone wishes me a ‘happy Memorial Day’ I correct them and say, ‘Have a memorable Memorial Day, not a happy one.”

Did you hear about the duck flying upside down? It had a quack up.

In addition to military veterans, Rick’s focus is on inspiring today’s youth. “When people ask, ‘What’s the matter with children today?’ I say, ‘We are! How do you think these children learn? It’s not just in school. It’s in our homes and on the street, too. Keep in mind that children are always listening. They learn from how we talk, how we act. My goal in life is to set a good example for children.”

Even into his 80s, Rick continues to love bringing laughter to others’ lives, and it lifts his spirits, as well. “Sometimes I feel younger when I clown around.”