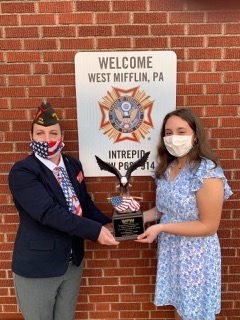 Surrounded by family, veterans and well-wishers, a North Hills Senior High School student and member of Girl Scout Troop 50146 was awarded a trophy and $1,000 check on September 24 after being named the 2020 Veterans of Foreign Wars Department of Pennsylvania Scout of the Year.

Catanzaro served four years in the United States Army.  His unit, Company E, 42nd Engineer Battalion, saw action in the Pacific Theater of operations at the Battle of Attu in the Aleutian Islands in 1943.  It also saw fighting during the Battle of Manila, Philippines, in 1945.

Catanzaro’s battalion won two battle stars during the war, and he earned the Asiatic-Pacific Campaign Medal among his other awards and decorations. After returning home, he was active in his community through several benevolent and fraternal organizations. “I was seven when he died 10 years ago, so unfortunately, I did not spend much time with him or have much memory of him,” Hannah shares. “My mom says he was a great dad and grandfather, quiet and strong, but did not talk about the war much.”

Hannah also has several cousins in North Carolina who currently serve in the military.  One is commissioned as a lieutenant colonel in the Army. A second is a sergeant first class, also in the Army, and a third is a senior airman in the Air Force. “I’ve always respected people in the armed forces,” she says. “Their level of commitment to helping people and trying to be the best at what they do is something I’m proud of.”

Veterans of Foreign Wars District 29 Commander Jessica King was at the ceremony to present Hannah her award at the Thompson Run Athletic Association on Ball Avenue inWest Mifflin.  The Mon Valley resident and life member of East McKeesport VFW ‘Hilltoppers’ Post 8430 said Hannah’s efforts show the positive aspects of scouting. “My daughter is at the age where she is starting school and will be able to participate in activities like scouting,” comments King, a Marine and Iraq War veteran. “Seeing what all Hannah has accomplished tells me that scouting helps motivate and prepare young people much like military service does.”

Additionally, VFW Post 914 ‘Intrepid’ West Mifflin gave the scout $500 for her achievement.  Presenting that award was post commander Jake Bradich. “Our post has always been a supporter of scouting,” says Bradich, who, like King, is an Iraq War veteran.  “Like the VFW, scouting is community-centered, and carries a proud tradition of people helping people.”

Hannah intends on majoring in aerospace engineering for her post-secondary studies.  She is the daughter of Mario Sciulli, an employee of the United States Postal Service, and Renee Catanzaro.  Her sister, Veronica Sciulli, has also distinguished herself in scouting.  Her family was present during her awards ceremony in West Mifflin.

The VFW Scout of the Year contest is open to all registered, active members of a Boy or Girl Scout Troop, Venturing Crew, or a Sea Scout Ship who earned the Eagle Scout Award, Girl Scout Gold Award, Venture Summit Award or Sea Scout Quartermaster Award. Those interested in next year’s competition can find application requirements and details on the VFW national website. Completed application packets should be submitted to a local VFW Post by March 1.