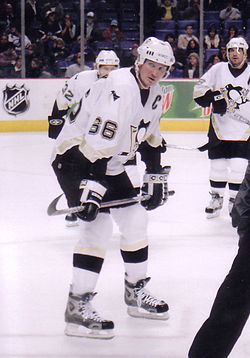 No other man has done more for the game of hockey in this city than Mario Lemieux. His spectacular play on the ice helped propel the Penguins to two Stanley Cups in the early 1990’s.

Upon retirement his leadership in heading a consortium of buyers saved the franchise from economic ruin, and his return to the ice following retirement helped lead the team to the playoffs once again. Area fans are indeed lucky because at one point the franchise was about to be dissolved.

This wouldn’t have been the first time our city saw its hockey team disappear. Going all the way back to the turn of the 20th century Pittsburgh has been a hotbed of hockey. The old Duquesne Gardens, which sat right across the street from St. Paul Cathedral in Oakland, once boasted the finest artificial surface in North America.

The Gardens played host to several teams, from amateur to Professional. The Yellow Jackets and the Shamrocks were two of the better amateur teams which graced the Garden’s ice in the 1920’s, and the Pittsburgh Pirates were our city’s first entry in the National Hockey League. From 1925 to 1930 the Pirates called the Gardens home, but because of financial reasons the franchise moved to Philadelphia.

In 1935 John Harris, owner of the Gardens, formed the Pittsburgh Hornets. The Hornets played in the American Hockey league and were the Toronto Maple Leafs farm club.
The biggest star of the Hornets was not a high scoring center or forward but a 5ft. 7 in. 165 pound goalie by the name of Baz Bastien. He was popular with the fans and was destined to be a star in the NHL till a puck hit in the eye at a Hornet training camp in 1949.

The Hornets were a successful franchise, wining two Calder Cups In the 1950’s. The Hornets were disbanded after the 1955 season because of the demolition of the Duquesne Gardens.  Seating only 5,000 people the Gardens could no longer service the needs of an ever growing city.

In 1961 the Hornets reappeared, this time as a Detroit Red Wing farm club. The new Hornets played in the brand new Civic Arena. The seating capacity was almost double that of the Gardens, and the ice was considered quite good.

The 1966/67 Hornet team won the Calder Cup, beating Providence. The team coach and general manager was Baz Bastien. However, once again fate was against the Hornets. The Penguins, a new entry in the NHL, started play in 1967. The Hornets disappeared.

As a kid growing up in Pittsburgh in the 1960’s I followed hockey. I was excited when the NHL decided to place a team in Pittsburgh. My favorite player from that era was a young center by the name of Michel Briere. He was a fine hockey player and destined for greatness, but he died in a car accident following his rookie season in 1970. In 1984 another young skater named Mario Lemieux made his Pittsburgh debut. The rest is history.