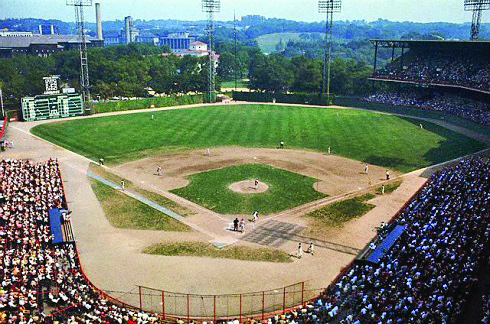 In the time shared between fathers and sons, big sisters and little sisters, uncles and nephews, there is a continuing rite of passage. That rite of passage is baseball.
In October of 1960, I had my first encounter with the sport. I was six, walking home from school with my two sisters. As we turned the corner and headed down our block, we noticed a huge traffic jam stretching way past our house, which sat on Forbes Avenue in Squirrel Hill.

Now, the people stuck in this traffic jam were actually happy. I could feel their excitement. My two sisters must have felt it too because they took off running down the street with me bringing up the rear. Atop the front steps leading to our house stood my father. When I got there, he was already telling my sisters something about the Pirates beating the Yankees in something called a World Series. Our house wasn’t that far from Forbes Field, and a lot of people stuck in traffic were coming from the game. I looked at the traffic jam and back at him and asked, “What’s a World Series?”

The following day, he bought me a ball and glove and played a game of catch with me in the backyard. The following spring, he took me to my first game at Forbes Field. The Pirates were playing the Milwaukee Braves that day. I wore a new jacket that had “Pirates” written in gold across the front.

A kid going to his first baseball game goes through emotional phases. Being around thousands of people is scary, but fear quickly turns to excitement. I kept a firm hold of his hand as we wound our way through the crowd and found our seats.

As I grew older, I saw many ballgames at Forbes Field. I liked that old ballpark. I liked the green grass, the ivy covered walls, and I enjoyed watching the pitchers warm up in the bullpen. I also liked the way the shadows fell across the field, the way cigarette smoke drifted up into the rafters, and the low, almost hypnotic murmur of the crowd.

Forbes Field was home to more than just baseball; football played a big part in its history. Duquesne University, Carnegie Tech and the Steelers all called Forbes Field home at one time or another. Art Rooney often watched his team play from atop the roof on the first base side.

Over the years, Forbes Field played host to many different events, from circuses to boxing matches. In July 1951, Jersey Joe Walcott defeated Ezzard Charles for the heavyweight championship, the only heavyweight title fight fought at Forbes Field.

On June 10, 1943 and shortly afterwards on July 12 of that year, Fritzie Zivic took on middleweight Jake LaMotta at Forbes Field. Zivic lost the first match by a split decision, but won the second fight in 15 rounds. At the time of the fights, Zivic was ten years older than LaMotta.

The end came for Forbes Field in June 1970. It played a big part in the lives of Pittsburghers.