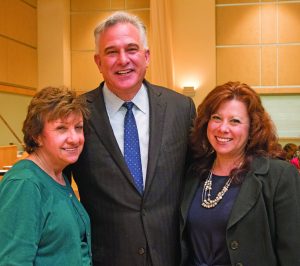 The Circuit Center on Pittsburgh’s South Side, home of the IBEW District #5, came alive on Wednesday, May 9 for a day-long commemoration of older adults. The day started with a panel of experts that brought the audience up to date on state matters impacting their lives, including in the areas of senior services, elder law and senior justice. The panel included Assistant District Attorney Julie Capone, who has been the chief prosecutor of crimes against the elderly in Allegheny County for more than a decade. Kurt Emerling, currently in charge of the Allegheny County Area Agency on Aging, gave an inside look into services available for seniors to protect themselves from predators looking to victimize them.

Robert Peirce III gave the legal perspective on the often complicated and overlooked aspects of elder law that need to be addressed in order for seniors and their families to enjoy peace of mind. Dan Buzzard from Orphan’s Court shared his expertise regarding guardianship. Senior Justice Advocate Dick Skrinjar from the District Attorney’s Office was the moderator.

Popular local fitness and chair yoga expert Bonnie Banze got everyone’s hands in the air with a non-impact workout right before lunch.

District Attorney Stephen A. Zappala, Jr. welcomed the group and thanked the International Brother Hood of Electrical Workers Local #5, their membership and President Michael R. Dunleavy for their generous support of the event. DA Zappala also reiterated his commitment to the seniors of Allegheny County to “bring the criminals that victimize them to justice and bring justice to senior victims.”

His invitation to lunch was quickly heeded as the Fluted Mushroom provided gourmet box lunches. The amazing keyboard talents of Edwardo provided entertainment from the American songbook, Broadway, Top 40 and popular music from the past seven decades. When he played his last song, “Happy Trails to You,” it was the signal for a demonstration of the new heights that technology has risen to in the District Attorney’s fight against crime.

John Hudson, a former Secret Service Agent assigned to the White House, now the Technology Consultant to the DA’s office, launched a drone high above the audience to give a bird’s eye view of how observations are conducted. While in the air, a live picture from a camera mounted on the drone was transmitted to the giant screen in front of the hall. The audience had the unique opportunity to see themselves the way a drone sees and they walked away with a new perspective on the fight against crime.

National award-winning writer and Emmy winning TV host Doug Oster wrapped up the day with his entertaining and informative insights into better living and eating through organic gardening.

ACCESS Pittsburgh provided 40 vans to hundreds of passengers that began their day’s trip from one of the 40 centers around Allegheny County. If you missed this highlight event of Older Americans Month, mark your calendar for May 8. 2019.

Story based on reports submitted by Ed Chadwick.

All photos by Joe Appel Photography for Pittsburgh Senior News