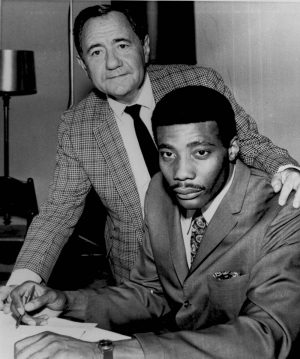 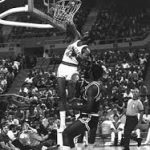 Although I am a sports fan, I have not generally followed the NBA. For most of my life I have followed college basketball. The reason is that Pittsburgh, my birth city is not a basketball town, it is a hockey town. The NBA has never had a team in Pittsburgh. During the 1960s, however, Pittsburgh was the home of three professional basketball teams and of one of the greatest players of all time. The Pittsburgh Civic Arena opened in 1961. At that time, the Penguins did not exist. There were only 6 teams in the NHL. Pittsburgh had been the home of the Pittsburgh Hornets, a team in the American Hockey League. When Duquesne Gardens was demolished in 1956 the Hornets did not have a home in Pittsburgh and the team relocated to Hershey. When the Civic Arena opened the Hornets returned. At the same time the Civic Arena became the home of the Pittsburgh Rens, of the American Basketball League. The ABL was started by Abe Saperstein, the owner of the Harlem Globetrotters. The star of the Rens was 19 year old Connie Hawkins. Hawkins was banned for life by the NBA because of alleged ties to point shaving at the University of Iowa. There was not any proof that he was guilty and besides he was a freshman and not eligible to play on the varsity at that time. Hawkins was the MVP of the ABL. The ABL folded in 1963. Pittsburgh had a team in the American Basketball Association in the first year of that league, 1967-1968. The Pittsburgh Pipers also were led by Connie Hawkins, along with Art Heyman, Charlie Williams and Chico Vaughn. The Pipers won the first ABA Championship and then moved to Minneapolis. The team returned to Pittsburgh for the 1969-70 season as the Pittsburgh Condors but without Connie Hawkins. By that time Hawkins settled a lawsuit against the NBA and was assigned to the Phoenix Suns. Hawkins went on to play for the Suns, Lakers and Hawks and was elected to the Basketball Hall of Fame. Hawkins was Dr. J before Dr. J, Michael Jordan before Michael Jordan.