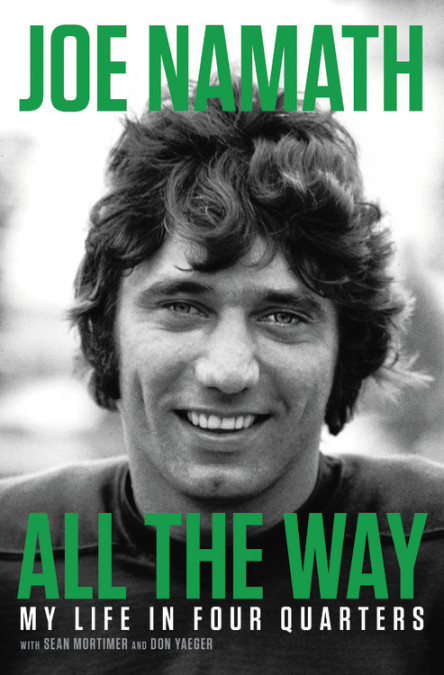 It all began in 1960 with a long snap behind the line of scrimmage. That year, Joe Willie Namath, a senior at Beaver Falls High School, ultimately punted his Tigers to a WPIAL state championship. Years later, he would “guarantee” a Super Bowl III victory for the New York Jets, accomplish a stellar 13-year NFL career then flash his by-then famous smile on TV’s and Hollywood’s screens.

The former New York Jets quarterback, Super Bowl MVP and Beaver County native, now 76, chronicles these highs (as well as many lows) in his new autobiography, All the Way: My Life in Four Quarters, available at all major book retailers and online at Amazon.com. The son of Rose and John Andrew Namath, a steelworker—and the youngest of four sons (with an older adopted sister)—Joe mixes in memories of growing up in Beaver Falls, which prepared him for his future destiny as both a professional athlete and a TV/movie personality.

After his local high school graduation, Namath went on to attend the University of Alabama in Tuscaloosa. As early as his sophomore year, under coach Paul “Bear” Bryant, he led the Crimson Tide to a 10-1 season as the starting varsity quarterback.

After earning his degree, Namath—the first overall selection in the AFL draft—chose the New York Jets and was offered the most lucrative contract in football history at the time. With that $427,000 agreement and a move to New York, “Broadway Joe” was born.

Upon entering the NFL in 1965, Namath quickly gained this moniker after his charismatic mug was featured on the cover of Sports Illustrated. That first season, he was named AFL Rookie of the Year, earning 18 touchdowns in 13 games. In his off time, Namath began to make TV appearances on the Dean Martin Show, The Tonight Show, the Sonny & Cher Comedy Hour, and more—further fueling his popularity beyond sports.

Then in January 1969, QB Joe spurred the Jets to a 16-7 victory over the Baltimore Colts in Super Bowl III, still regarded to this day as one of the greatest upsets in US sports history. (The publication of his book comes at the 50th anniversary of that momentous win.) He was a Jet until 1976 then was traded to the St. Louis Rams, where he played for one season. Namath was the first New York Jet to retire his number (12).

Even before his Hall of Fame career reached its conclusion, Namath had found a second home on the screen. He continued to make frequent television and talk show appearances, and endorsed some of the top products of the day, including Schick razors, Noxema shaving cream, Brut Cologne and Ovaltine. Namath played himself on the award-winning Brady Bunch, and teamed with George Carlin on The Flip Wilson Show, Lucille Ball on Here’s Lucy, and Dan Rowan and Dick Martin on Rowan & Martin’s Laugh In. He further cemented his widespread appeal in Hollywood productions like C.C. and Company, Chattanooga Choo Choo and The Last Rebel. His iconic life was the subject of the 2012 documentary Namath.

A battle off the field
Namath doesn’t just write about the good times in his new book. He speaks candidly about his years after the gridiron in which he nearly drank himself to death following his divorce to his ex-wife, Deborah.

“The drinking was what would kick my butt for a long time,” he writes, noting that he had gone off alcohol for more than 13 years while he was married. Their divorce in 2000 set him off the wagon. “I believe any of us can be brought to our knees whether from physical or emotional pain. Over the years, I learned how fragile we humans can be.

“When I fell back into the drinking, I was basically alone again in a sense.” Once in recovery, he had a revelation: “I learned that I had used my divorce as an excuse to go back to drinking. That knowledge made me a stronger individual. . . To this day, I’m thankful, and I continue one day at a time. It’s not as big a challenge as it used to be, because it’s not a part of my life. I don’t even think about it.”

Namath also opens up about his parents’ divorce, his suspension at Alabama due to injuries, his decision to check into rehab (he hasn’t had a drink since) and much more.

Through it all, Joe has never forgotten his western Pennsylvania roots. In fact, when he was elected into the Pro Football Hall of Fame in Canton, Ohio in 1985, who did he ask to present him? Larry Bruno, his football coach from Beaver Falls High School, where it all began.