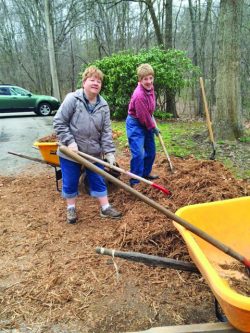 There is no doubt that our county’s three state parks bring enjoyment, recreation and beauty to the lives of local residents. We are fortunate to have Moraine State Park, McConnells Mill State Park and Jennings Environmental Education Center right in our backyards.

Taking care of these natural wonders, however, requires some labor of love. This is where the efforts of a community nonprofit called 3MJC really shine. The Moraine, McConnells Mill and Jennings Commission, formed in the late 1990s, partners with our three local parks to help enhance their appearance and function, preserve their resources, manage native plants and animals and raise funds for park projects and activities. The group is approved by the Pennsylvania Department of Conservation and Natural Resources of Pennsylvania.

“We are a small ‘friends’ group and we’re so passionate about our three beautiful local parks,” says 3MJC member Karen Hungerford. “We offer park visitors learning opportunities and experiences that enhance those already provided by the parks. Our projects help to sustain and increase biodiversity, as well as assist in conserving significant aspects of the parks’ history and buildings.”

Last month, 3MJC began a focus on raising funds for its next project: the renovation of a local one-room schoolhouse. “We would like to be able to make it a local museum plus hold educational events inside,” Karen explains.

Foltz School House sits on the park property of Jennings Environmental Education Center. Constructed in the early 1880s, it served as a school for local children until 1963, teaching first though eighth graders. In 1963, it was closed and has since fallen into disrepair.

Several years ago, the Pennsylvania Department of Conservation and Natural Resources invested in the schoolhouse to stabilize the foundation, build a cupola, paint the exterior and replace the floor, roof and chimney. Yet more work is required to make the building suitable for the public to visit and use.

“Specific tasks that still need to be done include repairing the ceiling, installing electricity and insulation, creating a lighted handicap accessibility entrance, obtaining a secure front door, replacing and installing glass windows, repainting and hanging the shutters, creating educational panels for outside of the building, landscaping and creating a parking area for school buses and cars,” explains 3MJC secretary Deborah Sale. “Also, engineering and architectural plans are needed along with an occupancy permit.”

The Foltz School House’s historical significance is that it was the longest attended one-room schoolhouse on local public land. The completion of its renovation will introduce children and the public to the significance of the educational system of that era, compare and contrast the past and present educational systems, relate the period living conditions and clarify the impact of the Brydon Coal Mine, which sat above the school. “With the help of the knowledgeable educators at Jennings EEC,” Deborah notes, “the Foltz School House will become a teaching tool and an asset to the community.”

3MJC is currently in search of construction and electrical labor, school artifacts and monetary donations for this project, as well as school alumni who would be willing to share their school stories. Contact Deborah Sale by email at dsale@pa.gov.

Some of the projects that 3MJC have been actively involved in:

A renovation of McConnells Mill by constructing wooden gear teeth required for the mill to run. Two full sets of teeth were built and installed. Each tooth is made of hard maple and required 34 different saw setups to manufacture.

The Moraine Native Plant Restoration Area across Pleasant Valley Road from the park office. About two acres that were covered by cool season grasses and invasive species such as multiflora rose, garlic mustard and autumn olive are being replanted with a mix of native wildflowers and warm season grasses.

The Moraine State Park Boundary Project is allowing 3MJC to work in cooperation with local geocaching and metal detecting clubs to accurately locate all of the park’s boundary corners. With the aide of their GPS units, volunteers went into the woods and fields to search for exact coordinates and the markers that designate the park’s corner points. During Boundary Project days held in 2007 and 2010, almost every corner point was located and several areas of concern were noted. This project now serves as a model for parks statewide in locating their boundaries.

3MJC wrote a Pennsylvania Department of Health “Get Active!” grant to secure the floating kayak dock at McDanel’s Launch in Moraine State Park. 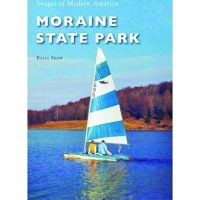 Butler County resident Polly Shaw has published a book on the illustrious history of Moraine State Park and its surroundings. Moraine State Park is part of the Images of America series by Arcadia Publishing. It details the 20,000-year backstory of the once “Wisconsinian glaciation” and how glacial deposits identify what is called the “moraine,” or the farthest area covered by the glacier.

A retired teacher, history enthusiast and longtime state park volunteer, Polly recounts the impressive reclamation of the land that had been ravaged by mining and oil, and the monumental work that transformed it into Moraine State Park—including the construction of a dam, moving a US highway and repurposing the surrounding area.

Geographically, Muddy Creek was once a north-flowing stream blocked by a south-advancing glacier, which formed a huge lake that lasted until the glacier dam began to retreat. The lake rapidly drained, eventually exposing the vast Muddy Creek basin. In the 1960s, Butler resident Dr. Frank Preston, an engineer, ecologist and conservationist, had a vision to recreate the ancient glacial lake. He worked with (and helped to form) the Western Pennsylvania Conservancy to reclaim the land, seal the mines, cap the oil and gas wells, backfill the stripped land and create the 16,725-acre Moraine State Park. The park opened to the public in 1970. Its centerpiece, manmade Lake Arthur, has since been an attraction for anyone who enjoys outdoor recreation and relaxation.

Polly is a member of 3MJC. Her book can be purchased at various local stores, including the Owlet Gift Shop at Moraine and the Nature Shop at Jennings; or online at Amazon.com.