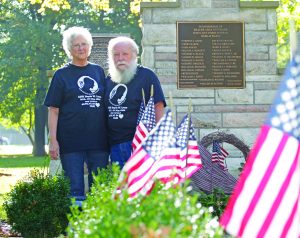 Brighton Township residents Lydian Fisher, 75, and her husband, Jerry, 75, a US Navy veteran, wanted to give back something to those who have sacrificed so much for our country and the freedoms that we all enjoy. So when Jerry saw a story in the Beaver County Times about a bus trip to be held on November 6, 2006 for World War II veterans to see the World War II Memorial in Washington, DC, he called the organizer and, in that conversation, volunteered Lydian’s skills as a nurse to accompany the veterans.

“Jerry called Jim Hilts of Coraopolis, who was organizing the original trip, and volunteered my services,” says Lydian, a 45-year career registered nurse. “From then on, we became part of the committee for the trips and have been involved ever since.”

The Fishers give the credit to Jim Hilts for his inspiration to create what are now twice-annual trips. “Jim, a Vietnam War veteran, wanted to take his father, a World War II veteran, down to see the memorial,” Lydian explains. Unfortunately, his father died a year after the memorial was completed and he wasn’t able to get him down there in time. So Jim made a vow to himself that he would get as many World War II veterans down to DC “before it was too late.”

The committee of volunteers organizing the trips grew under Jim’s leadership, with trips every May and October departing from a pick-up point in downtown Beaver, as well as from Green Tree and Monroeville. Over the years, veterans filled as many as five buses; now, the excursion is down to one bus.

“As the years went by, we received fewer and fewer calls from World War II veterans, so we invited all Korean veterans starting in 2014. We also increased the number of memorials we visit to include the Korean Memorial, Arlington Cemetery to view the Changing of the Guards at the Tomb of the Unknown, and the Marine Corp (Iwo Jima) Memorial.”

The one-day trips are free and are open to all military veterans who served prior to May 15, 1975. The trip includes transportation to and from Washington, meals, snacks and beverages. A nurse, several volunteers and two Reserve Officers Training Corps (JROTC) students accompany the veterans. Wheelchairs are available on request.

In total, 1,798 veterans have traveled on 38 buses since 2006. The oldest World War II veteran to date is Charles Wiggins, who was on the October trip after celebrating his 100th birthday
in September.

There have been many touching moments throughout the years, Lydian shares. “When the veterans are at the various memorials and people, adults and children come up to them and thank them for their service, many don’t understand why they are thanking them. They say, ‘It was just something I had to do’.”

The next trip is being planned for May 2018. Since the goal is to fill every seat with a veteran, family and friends are not able to attend.

In order to continue offering the trips free to veterans, donations are gratefully accepted. Checks should be made payable to “The Vets Bus Trips” and mailed to Wesbanco, 701 Corporation Street. Beaver, PA 15009, ATTN: Vets Bus Trips. For more information or to make a reservation for the May 2018 trip, call (724) 709-3614.