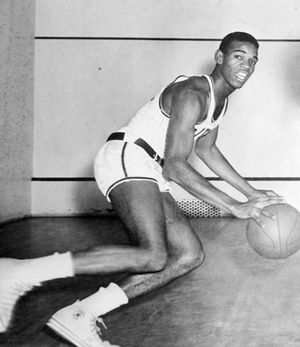 The NCAA Tournament was in Tulsa this March. For the first time that I can remember I did not have tickets to an event like this. I could have purchased tickets in November on a pre-sale opportunity but I passed for some reason. Teams such as Baylor, Kansas, SMU are playing this weekend at the Tulsa BOK Center for an opportunity to move on to the next round. I have attended NCAA Tournament games in Tulsa, Nashville, Austin, TX, St. Louis, and Madison Square Garden. The last time the NCAA was in Tulsa was 2011. Kansas, Texas, Memphis, UNLV, Illinois, Boston University were in the field. For some reason, on the day of the first session I wore a Pitt windbreaker. When my wife and I walked into the BOK Center a tall black man looked at my windbreaker and said “Hail to Pitt.” I looked at him and said you are Julius Pegues (see attached photo). Julius was the first black basketball player for Pitt in the late 1950s. Although Pegues was one of the best high school players in Oklahoma in the 1950s, the local schools, the University of Oklahoma, Oklahoma State University and the University of Tulsa did not have any black players. A Tulsa oilman was a graduate of Pitt. That man arranged for Julius to attend Pitt and even paid for some of his expenses.When Julius arrived at Pitt he had to try out with the Freshman team. It did not take Coach Bob Timmons long before he put Pegues on a full Scholarship. Pegues had a great career with the Panthers and led the team along with Don Hennon to the NCAA Tournament in the late 1950s.

I knew Julius was from Tulsa but I had never met him. My wife and I talked to Julius and his son, an attorney in Dallas for about 30 minutes. I told the son that his father was my basketball idol when I was 10 years old. Julius Pegues was a great basketball student athlete. He graduated from Pitt in Aeronautical Engineering and he worked in that field for McDonnell Douglas for many years. For many years, Julius Pegues has been a civic leader in his hometown of Tulsa, OK. My schools (Pitt and Tulsa) are not in the tournament this year. I am rooting for the underdogs.